We Have Recovered Tens of Millions Of Dollars for Clients

Mark Kempton has tried lawsuits in all parts of the State of Missouri for over 45 years. Mark has tried civil cases and criminal cases.

He has represented individuals and companies. He has prosecuted cases for plaintiffs and defended cases for defendants. He has obtained record-setting verdicts for injured people and he has protected innocent parties from serious claims.

Mark’s honors and awards include the Lon O. Hocker Memorial Trial Lawyer Award (1984), induction by invitation to the American College of Trial Lawyers (1998, State Chair 2000-2002), the American Board of Trial Advocates (Western Mo-Eastern Ks Chapter President 2003), the International Society of Barristers, and Best Lawyers in America. Mark has been rated AV (highest classification available) by Martindale-Hubbell since 1984 and he has been named a Super Lawyer for Missouri each year since his inception. 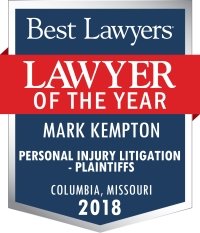 Our Sedalia personal injury lawyers are ready to help you seek justice and financial recovery, no matter how complex your case may be, and no matter who the legal opponent is. Our legal advocates know how to assert clients’ rights against national insurance companies, large manufacturers, and other deep-pocketed opponents, coming away with legal victories for our clients time and again.